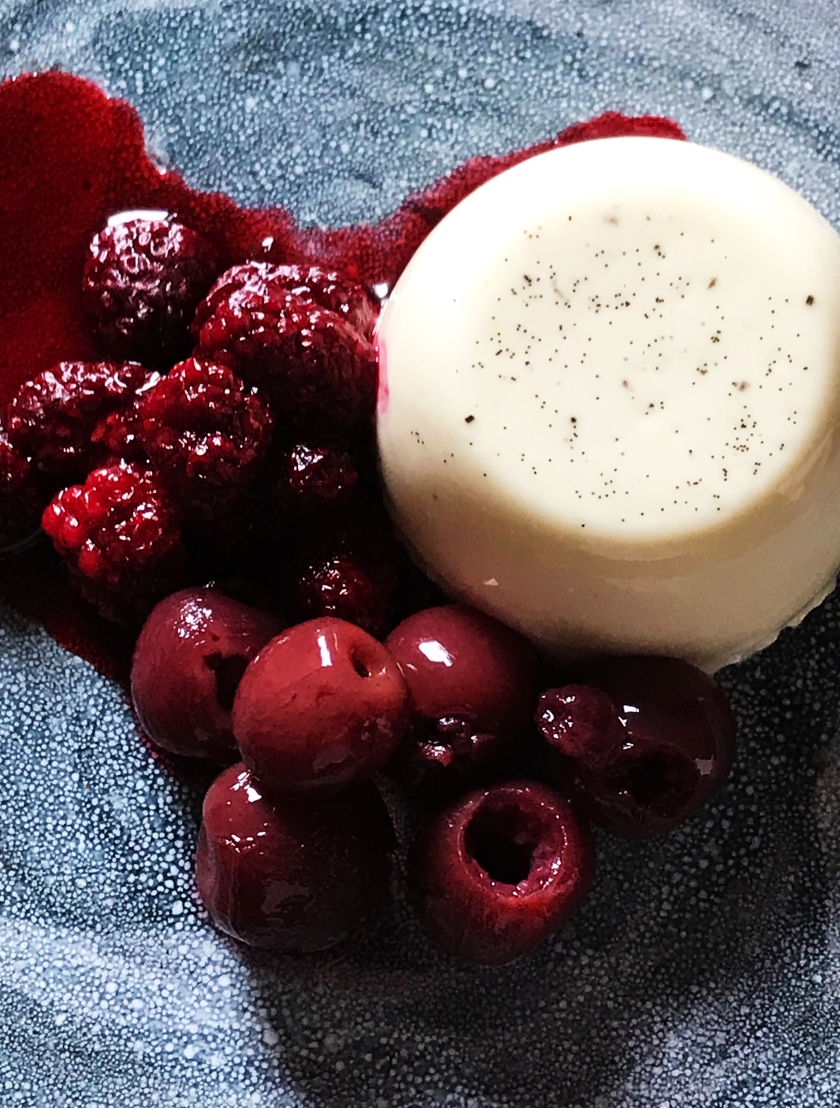 A year ago, I wrote about Gelo di Melone, and its worrying kinship with milk jelly. My antipathy towards milk jelly will never abate, never waver.  The worst of it was the way it separated out to leave the thinnest of layers of clear, actual jelly at the bottom, topped by a lactic morass of awfulness.  That sliver was the final insult, I’d have been perfectly happy with just jelly.  But, no, someone had to go and spoil it for everyone else.

So what have I just made?  What am I writing about?  Milk Jelly.

There has been an epiphany.  A road to Damascus moment in Moseley.

I made Panna Cotta.  Cream, milk, sugar, vanilla, turned into wobble by gelatine.  Panna Cotta that reveals the distance between classic, unchanging, delightful recipes, and the joyless reinterpretations churned out by malaevolent post war home economists.  I imagine that Panna Cotta and Elizabeth David got on famously; as she fought against the blandness of British food that had forgotten its history and lost its way, showing us the light of what Europe could offer.  I’m going to check this later!

Literally, it is cooked (cotta) cream (panna); but only just, heated enough only to dissolve the sugar and disperse decadent vanilla perfume.  Then sheet gelatine, that has been turned disturbingly sensual after a soak in water, is stirred through the mix and all is left to cool.

There is a a trick here; the vanilla seeds from the split pod you use will sink to the bottom if you pour your mix straight into its moulds.  The result, when you turn them out, looks like a garnish of fag ash.  I like the effect – it’s a visual in joke that reminds me of the Sicilian’s mum, whose fags and ash are a constant presence in Palermo.  However, should you wish to avoid the effect, let your mix cool, and begin to thicken,  then stir it to produce a more even and artful distribution of seeds.

On its own, a panna cotta is a delight; clean, sweet and milky, emboldened by the exoticism that vanilla always gifts.  Pair it with fruit – perhaps a compote of blackberries, or, even better, some of the boozy cherries from the previous post, and you have something seriously wonderful.  It is not a milk jelly, it is heaven.

Since making it, I’ve been reading up on Panna Cotta.  And I’m glad I did it that way round!  Many and strident are the opinions aired on how to make the perfect panna cotta – how sweet, how creamy, how much double entendre the wobble should convey.  It’s a mine-field of authenticity and cultural appropriation.  Luckily, I bumbled into the thing in my usual gung-ho, act first, think later way, armed only with Two Kitchens, and it was straightforward, easy, almost. I would urge everyone to give it a go.   I always do a milk/cream combo, for custards, ice creams and now, it seems Panna Cotta.  But other versions are out there.

200ml full fat milk (If you can get Gold Top, splurge, throw caution to the wind)

Mix the milk and cream in a saucepan and warm (don’t boil) on a low hob.

Split your vanilla pod (try to get a plump and moist one – they’re far more generous with seeds and flavour than the abandoned, desiccated things some places sell)

Scrape out the seeds, and add them, with the pod, to the cream mix.

Add the sugar and stir until it’s all dissolved.

Remove from the heat, and add the gelatine sheets, which you’ve been soaking in cold water for ten minutes.  Give them a squeeze to get rid of any surplus water first.

Leave the mixture to cool for an hour, perhaps longer, until it begins to set, but before the wobble is fixed.

Stir it, to mix the settled seeds evenly back through the cream and then fill individual panna cotta pots (easy to find online).

Ideally, you then leave them to set over night, and when you’re ready to serve, dip the pots into very hot water, which will melt the cream enough to turn them out.

Serve with the fruit of your choice.