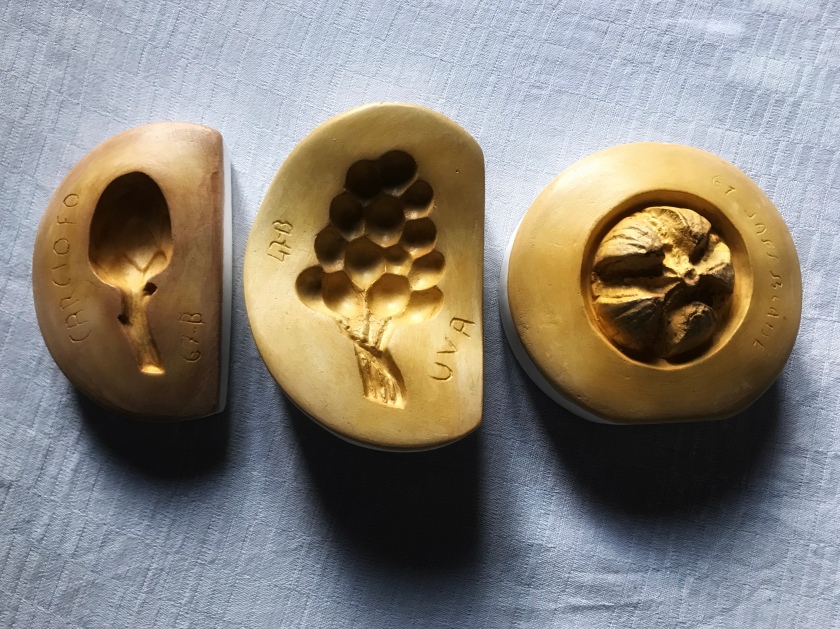 I forgot to ask the name of the shop,  or to take a photograph for posterity via social media.  I was too excited and made giddy by discovery.  It’s a Brigadoon of a place.  Fading from memory now, its only chance to be kept vivid coming from my keyboard.

The shop is a stone’s throw from the original Palermo home of the Frutta di Martorana (hand painted marzipan fruits), carved out of the back wall of the Chiesa di Santa Catarina. There is a tiny workshop where a man and woman – perhaps married, perhaps brother and sister, make moulds out of Plaster of Paris for creating 21st century marzipan fruit.

Although, these have become ubiquitous across much of Europe – from the dust of Spain to the drizzle of a British Christmas, it was here, just a few metres away in a convent, the Monastero della Martorana, where nuns created the first of these edible jokes, to decorate the bare, winter branches in honour of a visiting bishop.  It’s a fey tale, I hope it’s true, as it might indicate that convent life was not as grim and restricted as the heavily barred and caged windows imply.

The nuns have mostly gone now, they’ve broken free from their holy prisons, but the tradition of giving these marzipan fruits has remained – initially to expectant children on All Saints Day (November 1st), but now you can see them year round in the pasticerrias, piled high like a greengrocer’s display, garish treats for a very sweet tooth. 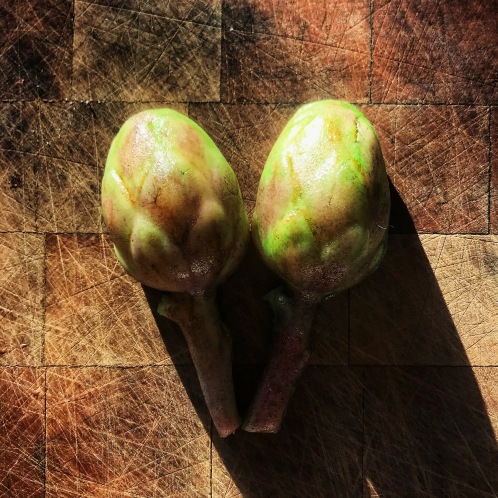 But we found the source, by accident, on via degli Schiopettieri.  The studio is almost anonymous.  A subdued sign says ‘Decorazioni in Gesso.  B Ferrante’.  If they’re closed, it’s a pulled down grey shutter, graffiti and parked vespas.  But when they’re open, they spill out onto the street outside, piling racks and crates of bone white moulds to in the sun.  Even in October, in Palermo, the sun can cook the unwary.  And these forms are wondrous, not just the ordinary pears, figs and chestnuts. Here there are heads of artichokes, split pomegranates, bunches of grapes,  clusters of cherries.  And then as you look closer there are cracked sea urchins, ferocious weaver fish, sardines and strange exotic species that defy identification.

Inside, Snr Ferrante paints the dried moulds with a sealant, kept heated on a single electric ring, in a can that predates possibly all of us, encased in layers of historic drips.  This resin is dissolved in neat alcohol, so the tiny, dark, cramped studio space smells like a back street pub at closing time.  As he brushed the molten varnish inside the moulds, it looked like a glossy smear of nicotine.  Shelves reaching to the ceiling are stacked with parcels wrapped in brown paper, reached by his sister/wife precariously perching atop a wobbling three legged office chair.  Between them, they know the contents of every parcel, with a certainty that must come from decades of close proximity.

This is a true Aladdin’s cave – bleached jewels of gesso for the taking at just two euros each .  It is out of time and out of kilter with the rest of the world.  How can they make a living with something so fragile, so unique to its place?  Defying mechanisation, a simple, hand made process lives on in a back street of Palermo.

We leave, clutching a bag of treasures, including the artichoke and the sea urchin – but also a scallop shell mould so we can bring The Chancellor’s Buttocks back to the UK  (a story for another day), and a giant Easter lamb, to make a dentist weep and destined to be packed with homemade pasta reale, its almond fleece encasing pistachio heart.

There wasn’t room in the bag for any more, so I will have to go back, not least for the spiky, dangerous fish.  I want to produce a fantastical still life from marzipan, all sea urchins and scales and sugar.