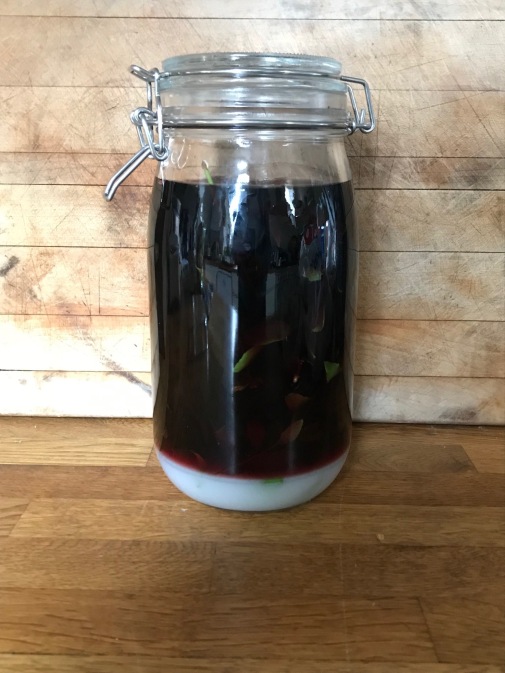 This is a long way from Sicily, or indeed Birmingham.

Once, someone ate a sloe, possibly expecting a damson-like burst of sweetness.  They got a wincing, puckering, spit it out sourness instead.  They persevered.  Somehow they thought ‘If I add these to gin, it’ll be perfect in the depths of winter’ So they did. It caught on. There must be a thousand and one understairs cupboards where a bottle of this peculiar British stuff is ageing to inky purple perfection. And then it was monetised, obviously, into a vapid version itself, allowing you to buy it off the shelf and forego the pleasure of musty, mouldy autumnal foraging, spiking your limbs on the blackthorns that jealously guard their sloes. And the patience, the delayed gratification of prolonged steeping. You get to forgo that too.

There are people who have deep pockets, or steely resolve. They manage to keep their sloe gin for years; either they make so much or drink so little. But my gin budget is limited and it would be disingenuous to claim I’m abstemious, so my single bottle rarely lasts long past Christmas, leaving me bereft of my British bitter liquer until the following December. Sad, but then that is partly the point of delaying gratification.

However, help has arrived from France, the north I think, with my discovery last year of Epine (literal translation, spine). Not at all like Sloe Gin, this is smoother, colder, more almondy and carries the vague peril of death by cyanide.

Like all members of the Prunus family – the leaves and seeds contain traces of the poison, whose older name of Prussic acid I prefer, it’s more melodramatic, less serial killer. The key word here though, is ‘traces’. They’ll only kill you if you eat enough. So, spend your day in the hills of Italy, snacking on wild, bitter almonds, you may die (believe me, it happened, I remember a childhood news story of a poisoned teacher on a walking trip in Puglia. I didn’t eat an almond for years). Or if you have a rampant laurel hedge, that you prune and decide to shred, the strong smell of marzipan and simultaneous light-headedness are a sign to step back and perhaps take a break.

If I haven’t scared you off, make épine. Now, in April, is the time. You need half a litre (by loose volume) of fresh, green shoots – free from aphids and their insect relatives. Once these shoots have turned woody from added lignin, you’ve missed the window and will have to wait until the purple sloes and the frosts arrive for your foraging hit. Wash your shoots and then add them to a sealable jar into which you pour 1.5 litres of wine (I use red, but rosé works well too), half a bottle of own brand vodka (that’s about 375ml). This stops any unwanted fermenting, as well as upping the booze quotient and making it a liqueur. And finally, sugar. Around 100g – but play with the quantities to hit the sweetness you desire.

Shake, seal and leave, for two weeks. Then strain, bottle, leave it in the fridge,  forgetting about it until there’s a heatwave in June or July. You should be outside, in that heat, as the evening begins and waiting for dinner.  Now you can open your épine.  It is not just an infused red wine, it is something simultaneously both refined, and domestic. There is a sense of something forgotten, delved from the past about it, perhaps a little deliciously illicit. One glass is not enough, and yet, with that vague almondy poisonous peril hanging over it, perhaps, one glass is plenty.

This is a short one,  mainly because I wrote about quince cheese last year, (the very first post) so there’s not a lot more to say.  Fruit cheeses are a super thick jam – so thick, that you can cut them, just like cheese.  Although packed with sugar, they should also retain a puckering tartness.

Simmer until it’s a roiling, suppurating , molten, burn-inflicting mass and when you pull a wooden spoon through it, the pulp momentarily remains parted, like the Red Sea, just before it engulfed the pharaoh’s army.

It keeps for ever, if kept somewhere dry and airtight.

Eat with real cheese and pickles

Last year, when I made the cotognata (Italian quince cheese) with mended moulds, saved from the bin, despite the best, foot-stamping efforts of TNT, I was talking with J about the long and broad tradition of British fruit cheeses, and we both started collecting recipes.  Whilst Sicily has it’s cotognata, and mustarda (not the spicy mustard version, but the heady, sweet, sweet grape juice one that Mary Taylor Simeti writes about), in Britain we quietly made the setting of fruit into hard jellies an under-the-radar national treasure.

Perhaps it’s our tougher climate, but we do have a lot of pectin-rich fruit in our trees and hedgerows.  And pectin is what turns fruit and sugar into something stiff, set and jewel-like.  I’ve also just read that it can slightly reduce your cholesterol levels.  What’s not to like?

So with this trove of recipes, gleaned from pre and post war women, foraging their way out of poverty and rationing, I decided to assemble my own array of forgotten cheeses.  Quince cheese is still probably the one more people have heard of – although they’ll probably call it membrillo if they have heard of it, perhaps thinking that only the Spanish ever thought to make it.  But I wanted to celebrate the diversity of Britain’s own food heritage, whilst appropriating the charm and twee religiosity of the Sicilian moulds.

Over three months, around Birmingham, I squirrelled out rosehips, medlars, crabapples, damsons and quinces.  And bought some greengages.  Then applying the magic formula above, made my jewels.  The only variation is with the medlar cheese, which frankly, just tastes like earthy sweetness.  So, added cinnamon and allspice were used to jazz up its sturdy brownity.

To finish though – I’ve been set a task – a 17th century recipe for Queen Henrietta Maria’s Marmalade of Cherries – dug from the inestimably excellent ‘Good Things of England’, Florence White’s treasure trove of English food. We’ll see if it’s a recipe that was good enough to console her in her unfortunate widowhood.  J has dropped a big hint that there’s plenty of time to make it before Christmas, and I have a freezer drawer stuffed with the necessaries.

Also, next year, I plan to make some suitably British moulds, to sit alongside the culturally appropriated Sicilian ones.  Fruit cheeses with images of medieval popes on them are all well and good, but they tend to upset the CofE contingent amongst my friends and relations.  I’ll see if I can fashion a passable St George or perhaps the head of Charles 1, although I doubt Henrietta would approve of the later.