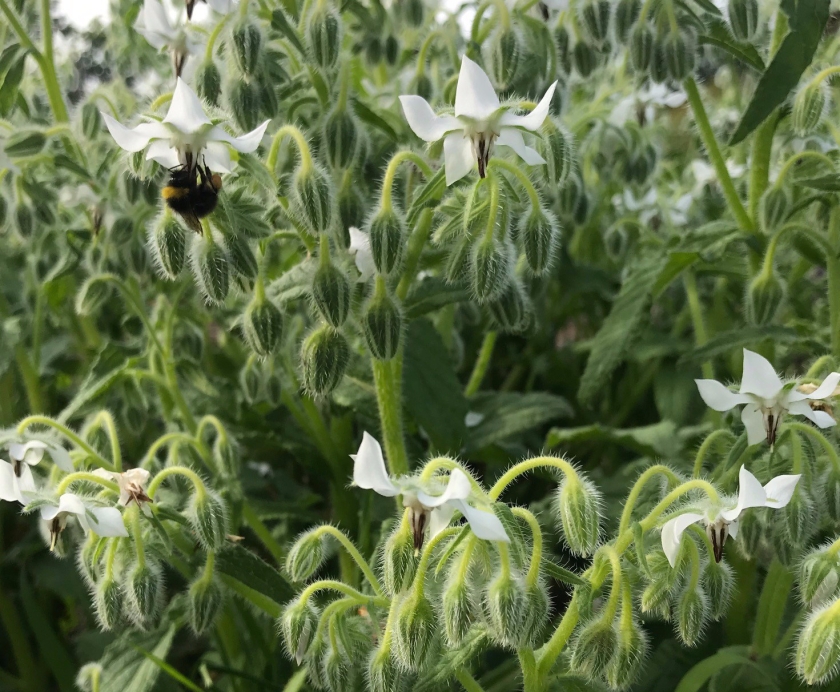 A random patch of white flowered borage has appeared in the middle of a path on the allotment.  Somehow it grew through the winter, whilst I wasn’t paying attention, and I’ve let it stay put. It’s easy enough to step over, and it and I have more pressing, more pernicious pop ups to deal with.

Like so many randomly self-placed plants, it is abundantly happy in its chosen path hogging position.  So much so, that now, before even the end of May, it is covered in flowers which are doing their best come hither looks for every bee in Moseley.  And not just the domesticated honeybees that live at the heart of the allotments, but countless feral, less biddable bees of varying sizes, shimmers and fuzzyness.  Bees make me happy.  Another reason the patch can stay.  I shall always be a tree hugging hippy at heart.

Borage is a herb.  I know that.  It says so in the herbs section of my RHS encyclopedia.  There are suggestions  for using its flowers as a garnish in a Pimms (it looks like drain water said a non Anglophile friend of the Sicilian’s) or be frozen in icecubes (11 on the scale of Camp 1 to 10).  Is that it?  I think this is stretching the definition of herb somewhat.  So, maybe, if it gets hot and I remember to pick some flowers, I’ll stretch a culinary use from my impromptu patch.  But otherwise I have no other plans for it.

The bees had other ideas though.  I was crouching in the soil, planting out borlotti beans next to the borage.  I snapped a quick video of the bees at work, pinged it to instagram and carried on with my Tom Good impersonation.  I am no influencer; my followers are mostly other food people, friends of mine or the Sicilian’s, a few writers and a vascillating personal trainer who manages to follow and unfollow at least three times a week. Perhaps he finds the pictures of Italian cakes and pasta simultaneously too distressing and tempting for his never ending carb free/paleo existence.  But amongst them is the wonderful Stefano, of ItalianHomeCooking, who jumps in with a suggestion for taking the leaves of my bee-friendly borage, dipping them in batter and deep frying them.  I’m learning that this deep frying thing is a wider art in Italy than in the UK perhaps.  There is a fondness and love of the process that goes way beyond our cod and chips, or mars bars (see arancine, Jewish artichokes, canolli and on and on)  But I was a virgin up until this point for the battered frittelle version of things.  Now I’m hooked.  I can feel a rush of deep frying approaching.  Stefano has suggested opening a frying joint – I am decidedly tempted.

When to eat frittelle?  Well, I ate the lot, in the kitchen, standing up at the counter. They were so good that burnt fingers and mouth were minor discomforts.  The batter of flour, soda water and seasoning is effortless – seconds in the making.  The leaves of the borage, which seem so unpromising, clad in stiff, skin pricking hairs not suggested delicacy or digestibility.  But the marriage of leaves, coated in batter, fried in hot, hot olive oil until golden…just another of those Italian marriage of simplicity. It’s a way of getting some of your five a day whilst cocking a snoot to  healthy eating.  The leaves lose all their unfriendliness and faint inside the crispy cheesy batter into almost a paste of green freshness.  Despite the parmesan, the flavours are not strong so much as physical sensations; the crunch, the melt, the heat, the desire for more.

I think the rule goes that if you can batter it, you can frittelle it.  I’m a novice here though, so a lot more experimentation and frying is needed.  I shall be forced to undergo more burnt fingers, more stand up in the kitchen dinners. The prospect of this does not, however, distress me. 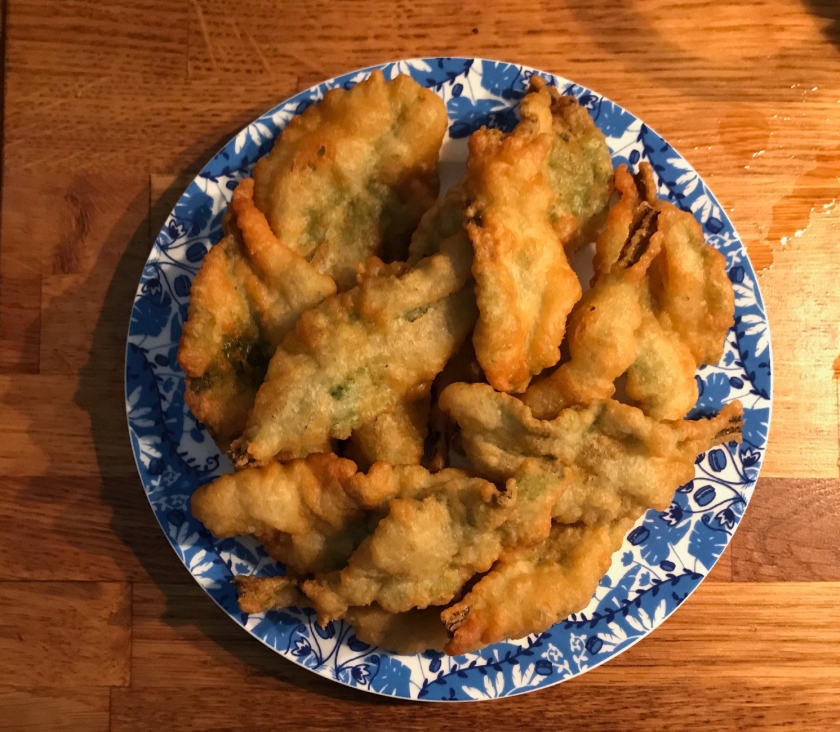 12- 16 medium sized borage leaves (make sure they’re clean, and from the edible borage plant, not one of it’s inedible cousins)

MIx flour, cheese and ground pepper with the soda water to create the batter, it should be a thick – strong enough to cling to the leaves, without running off.  Don’t add all the water at once, it’s easier to thin a batter down than to thicken it up.  Whisk until there are no lumps.  If you have a soda fountain, this adds to the fun and theatre, which makes these great for inquisitive young cooks

Heat your oil to deep frying temperature in large high sided saucepan or a deep fryer if you have one.

Dip the individual leaves into the batter and then fry, a few at a time, until cliched golden brown.

Drain onto kitchen roll, and eat them piping hot, ideally outside, with cold beer.

There are all sorts of different recipes out there – that add anchovies, or mozzarella, or use beer instead of water.  But I think starting simple and then building up the complexity is the way for me to go – discovering an extravagant menu of frittelle as I go.