There’s a short period in the autumn, usually a few weeks in October,  when you can buy quinces in the UK.  I’ve never seen them in a supermarket, so you might have to hunt them out – or plant your own tree.  Before Farmers’ Markets caught on, I’d make an annual pilgrimage with a friend to the corner of a rural garden centre, where someone had thoughtfully planted one, and where it fruited reliably and with forgotten abundance.

And they’re a tricky thing.  Yes they come with a heady perfume that will fill the kitchen when you first get them home.  And they have that slighty disconcerting ‘fur’ which rubs off when you stroke them, a characteristic only found in British quinces apparently – coats to survive our notorious summers perhaps? But my God, they’re tough – hard as nails and prone to grittiness.

Perhaps this explains why they have fallen out of favour here.  There’s a lot of effort involved when it comes to quinces.

But, boy are they worth it.  There are recipes for poaching them and baking them – but perhaps the most famous and widespread use of them is for a form of thick set Jam – what we’d call Quince Cheese, here in the UK. In Spain its membrillo, France has its pate di coing and Sicily trumps the lot with its Cotognata.

The recipes are much the same wherever you go – equal weights of quinces to sugar, stewed and sieved and then cooked down with lemon juice to a scalding, burping, lava-like consistency the colour of an Anglo-Saxon garnet and so stuffed with pectin that the cooled paste sets into a hard jelly.

It’s a thing of joy – it keeps pretty much indefinitely and possesses a fantastic, palate-cleansing, perfumed tartness despite all the sugar. You can slice it and eat it with cheese, or cut it into lozenges and cover in sugar to create your own fruit pastilles. Yes, you can buy it, as with most things – but the process, giving over several hours to peeling, chopping, stewing and stirring, stirring – is surely part of the pleasure? The smell, the gradual chemistry unfolding as the colour intensifies to that deep pink-orangey-red, the commitment to not leave the cooker for a second in case it catches, the trophy burns as the mini volcanic eruptions spatter you with molten sugar.  These steps are as integral as the actual ingredients to the finished cheese/membrillo/cotognata.

So if you’re Sicilian how do you improve on this?  With added baroque of course.

In the backs of kitchen cupboards, often hijacked as ashtrays; or the flea market in Palermo down the hill from the Palatine, you can still find wonky, crudely formed, old molds – specifically for the making of cotognata.  When turned out, you discover that your quinces have been transformed into St Christopher, or the Sacred Heart, a nameless bishop or an angel in flight. It’s an idea of genius – and typical of Sicilian food, that you take something simple, mundane even, and elevate it with an almost effortless flourish. 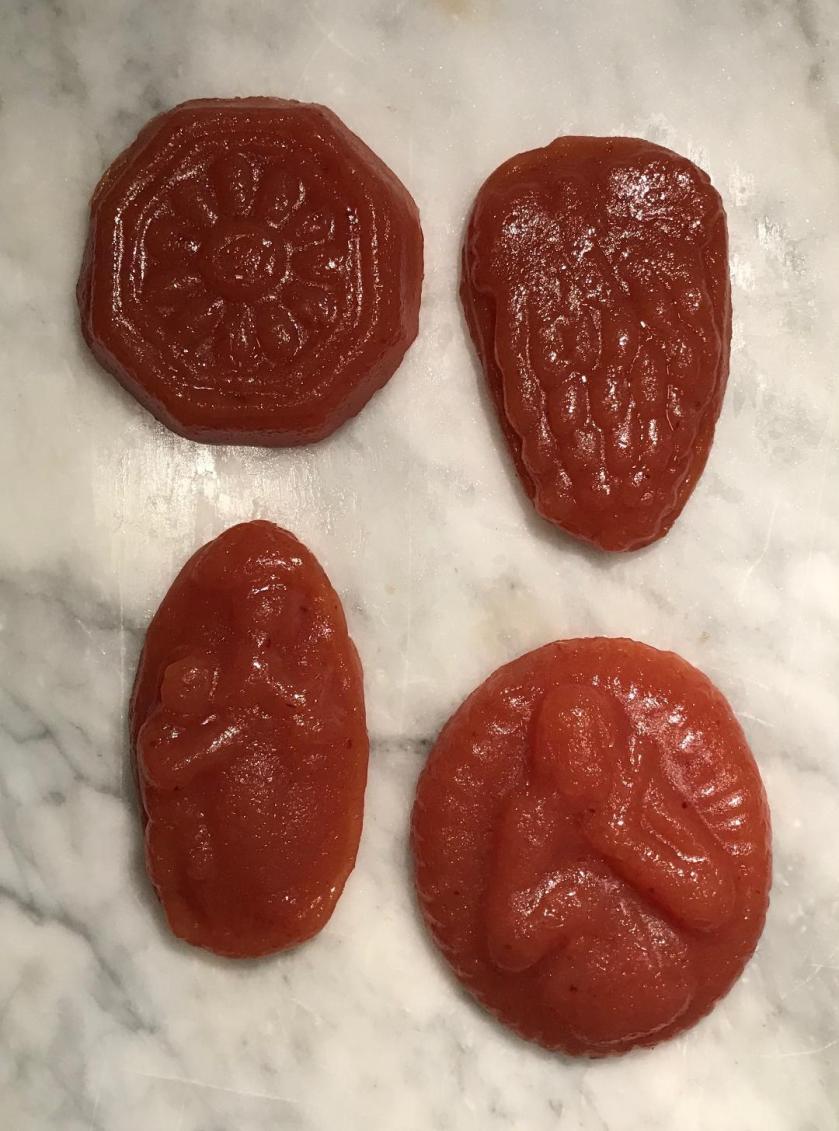 And finally, the gin – an inherently British response to quinces.  I’ve been making this for years – so long that I can’t remember were I first saw the recipe.  I do remember that it was one of those years when the sloes failed, to the extent that people were writing to the papers looking for suggestions to fill the Sloe Gin void.  The process is identical.  Take your quince (chopped up, core, peel and all) add to gin, add sugar to taste (there’s no point giving an amount, as everyone is scattered along the line from syrup to near neat gin), leave it alone until at least Christmas, bar the occasional jiggle. Drink